The American 82nd and 101st Airborne divisions' main objective was to secure and protect the Western flank of the D-Day invasion area. Sainte Mère Église was of strategic importance because of its two nearby bridges in the vicinity of Utah beach, about 2mi North-East from the planned drop zone of the 82nd Airborne Division and the Route National (N13 now a highway). By mistake, paratroopers from both divisions where dropped into the center of the village. One of them, John Steele, got caught on the church steeple, made famous by the movie "The Longest Day".  Let us tell you the personal stories of veterans we met over the years and about their unfortunate drop the night of June 6th 1944.

This bridge, about 3mi West of Sainte Mere Eglise, was one the objectives for the 82nd Abn Division. The three planned dropzones all nearby. Three days of fierce fighting took place here. One of the heaviest battles in the 82nd ABN Division' history. Now a beautiful and peaceful spot. With "Iron Mike" overlooking the valley, Merderet river and battlegrounds.

9387 of the ones who gave all are interred here and 1557 names are engraved in the wall of the missing, 172,5 acre. A place to pay your respects and honor these men and women. With over a million visitors every year, this is the most visited cemetery managed by the American Battle Monuments Commission. 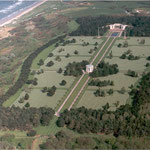 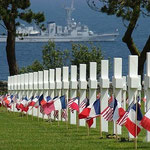 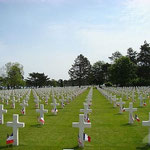 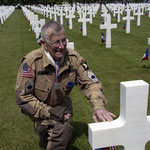 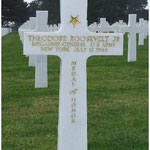 Not all was death and destruction. Let us tell you the story of the "Angels of Mercy". The church of Angoville au Plain was picked by two medics, Bob Wright and Ken Moore, to serve as their aid station giving aid to more than eighty casualties, Americans, Germans and even a fourteen year old boy. You will be stunned hearing their story.

Omaha beach is the most famous, but Utah beach the more important one. The nearest invasion beach to Cherbourg, with its deep sea harbor, which was important to bring in supplies. Considered as the most successful with the least casualties of all Normandy landing beaches. Here is where the 4th Infantry division came ashore. One of them was Gen. Teddy Roosevelt Jr, being the first general to set foot ashore from the seaborne troops. Learn about this success and why it was the most successful one on D-Day.

A beautiful, typical Norman village close to Utah Beach. This village has a church steeple overlooking the whole area, including Utah beach, and was used by the Germans as their artillery observation post. As a direct threat for Utah beach, this was one of the objectives for the 101st Airborne Division. Another was the gun emplacement just outside Saint Marie du Mont, "Holdy" gun battery and later the four guns at "Brecourt" Manor, taken out by Dick Winters' platoon, also portrayed in Band of Brothers.

Pointe du Hoc was the biggest German gun emplacement within the Normandy invasion area. On top of 100-foot high cliffs, considered impregnable. We will be here for an hour and even go into some of the bunkers. Find out how Col. Rudder's Rangers scaled these cliffs and took this gun battery.

The worst place to be on June 6th 1944! You will be impressed by the views of this beautiful and now peaceful beach. Ask us what all went wrong and the differences with Utah beach, you will understand why this was the worst place to be and even think how it was possible that they took this beach.

1 Applies to shipping within France. Information about shipping policies for other countries can be found here: Payment and Delivery Information
2 In accordance with Kleinunternehmerstatus exception of §19 of the German Value Added Tax Law, we do not collect or display VAT.
Log in Log out | Edit
Close